The thermoelectric power plant is located in the locality of Santa Barbara (administration of Cavriglia in province of Arezzo, Tuscany), roughly 50 km southwise respect to Florence. Originally designed to supply a power of 250 MW, it has reached a cumulative gross power of 340 MW. Nevetheless, it represents not only the main power plant in the area but also a masterpiece of contemporary industrial Architecture in Tuscany. It is one of the first power plant designed by Riccardo Morandi, and the two cooling towers are cosidered a work of art by both the architects and engineers communities: their thickness ranges from 25 to 19 cm aong their elevation (around 80 meters from ground), and this was possible thanks to the self-sustaining shape of hyperbolic paraboloid.

The wind tunnel campaign was carried out in the middle of the Nineties, constituting one of the first contract of CRIACIV wind tunnel, aimed to the evaluation of the wind-induced design load to employ in the structural verification necessary prior to procede to the maintenance.

The physical model, 1:300 scaled, was realized in plastic material and equipped with pressure taps disposed in specifically disposed alignments. By changing the angle of attack of the oncoming flow, omnidirectional pressure maps were elaborated, soto take into account also the interference phenomenon (between the two towers, but affecting mostly the tower in the wake). 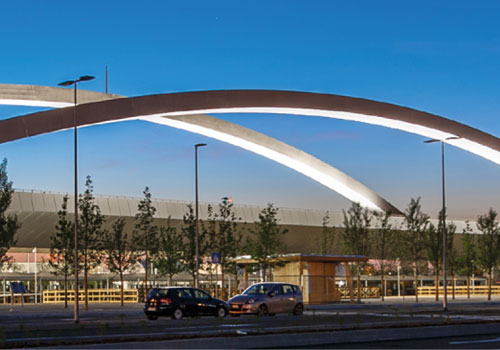